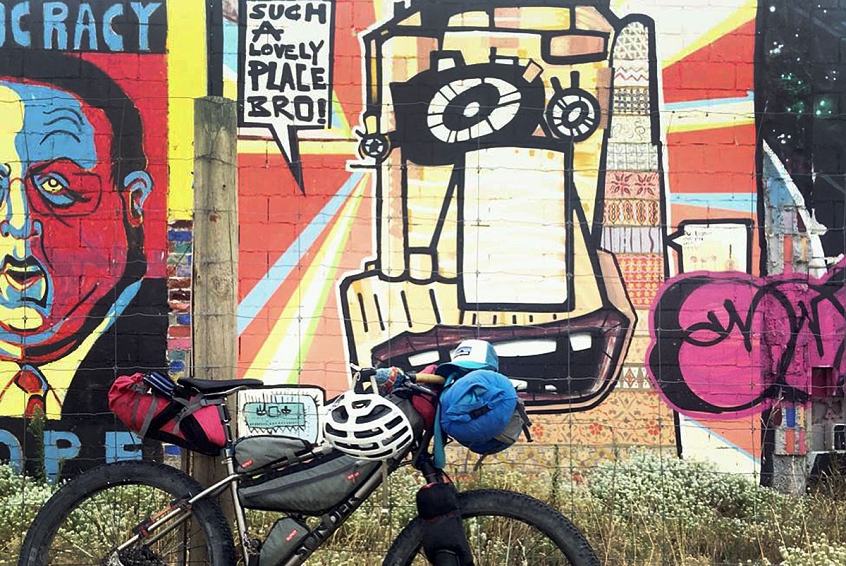 Life on the Broken Road Part 2 6 years ago was the last time I felled a tree. Back then it was my business, Beaufell Tree services. Despite it feeling weirdly emotional it also felt ‘right’ to be back on the saw again, doing what I was trained to do. This isn’t a return to the old days, sadly it can’t be. My body doesn’t allow it. I have to find new things to do that doesn’t rely on it. Now I’ll have to rely on my brain and personality to get by. A scary prospect!

This is one of my motivations to go on a bikepacking trip, to spend the time seeing the wood for the trees, to work out where I should go now? Not just in a geographical sense but in life now. Incidentally the gum tree was planted for fire wood and I’m helping out with the ‘gardening’.

Here’s to 2000+km on the South Island. Celebrating and staking my claim in Beaumont. Much like my own head, there’s nothing much in Beaumont. This Hotel is like an oasis to a sun beaten cyclist that’s battled 35deg heat. I got a private room for $25 and the food was incredible, prepared by the Icelandic owner Gunni

West Coast Wilderness Trail – leading from Greymouth, in persistent rain (which is how I imagine the town got its name in some part). You start along an old rail line hugging the coast, it’s not long then you’re in the swamps and well planted boarding leads you through km of flax, beech and eucalyptus forest. The noise of Cicadas is deafening and became so normal that it’s only when I came out of the other end some kilometres later that it ended and I emitted an audible ‘oh thank f@*k’.

Bridges, lakes, little two bit hick towns pass until the climb begins, over gravel tracks, signs for Cowboys paradise start appearing, getting excited by the prospect of the prospecting town. Whilst the paradise it wasn’t, the swooping descent was so good I contemplated doing it all over again!

Out of Cowboys Paradise leads to a stunning mountain valley, more fun descending until the valley floor. Getting to Hans Bay DOC site late meant quickly throwing all my clothes on (sandflies!!) and making some food to share with the resident Weka population. Choosing to bivvy on top of the picnic bench away from the Wekas, who’s curiosity quickly became bloody annoying. In the morning, a short tarmac effort to Hokitiki and then on to Ross where the trail ends. A cool tiny town with lots of gold mining history. I carried on along state highway 6 until it got late and I got to the stunning Lake Peringa. Sleeping with views over the placid lake over to the mount cook range, and the first sight of snow.

Travelling light means travelling fast. I did the 3/4 day ride in just under 2 days and that was still enough time to soak this lovely little route up. Highly recommend and yet another reason to get off the roads and for me justify these big ass tyres!

Maximum effort 100% of the time! Sometimes the hardest thing about bikepacking is getting your arse off the comfy chair and swapping it with what feels like a plank of wood.

The Central Otago Rail Trail. When rail trail is mentioned you know it’s gonna be flat. 200km of pure flat joy around some stunning scenes, quite towns jammed with lovely folk.

2500km through NZ still wasn’t preparation enough for the views over lake pukaki and lake tekapo. I spent nights here sleeping right by the waters edge unable to sleep because the stars were damn bright it was like they were bearing down on me. This is why I sleep in a bivvy bag rather then a tent, I don’t want to be closed off to the stars even if that means dealing with the odd mosquito.

My shadow is getting longer on the tarmac. Looking up from the long white line hearing a ute approaching as the sunsets.

They never fail to toot their horn,wave or raise a nonchalant finger from the steering wheel.

Friendliness and an appreciation of whatever it is that I’m doing.

I like to think that they see that cycling through their country is the best way to be part of their country.

Something happens to me as the evening approaches. I kind of think it’s like a second wind. A renewed energy in my body. As the heat of the sun gives way to the chill of the stars. I become more sharp. As night approaches my eyes are more fixated on the road just one meter ahead, my ears more tuned in to the environment. This is a dangerous time and I become excited like a child. My goal tonight is Christchurch and the beach. 90km more then what my goal was in the morning.

This would make a full circle of the South Island, just a few kilometres off 3000.  I’m still amazed of what my body and mind can do when it’s on two wheels. More so then any other time.

This is extreme enjoyment endurance and I am a cyclist and I love it.

Life on the Broken Road Part 3

Life on the Broken Road Part 1