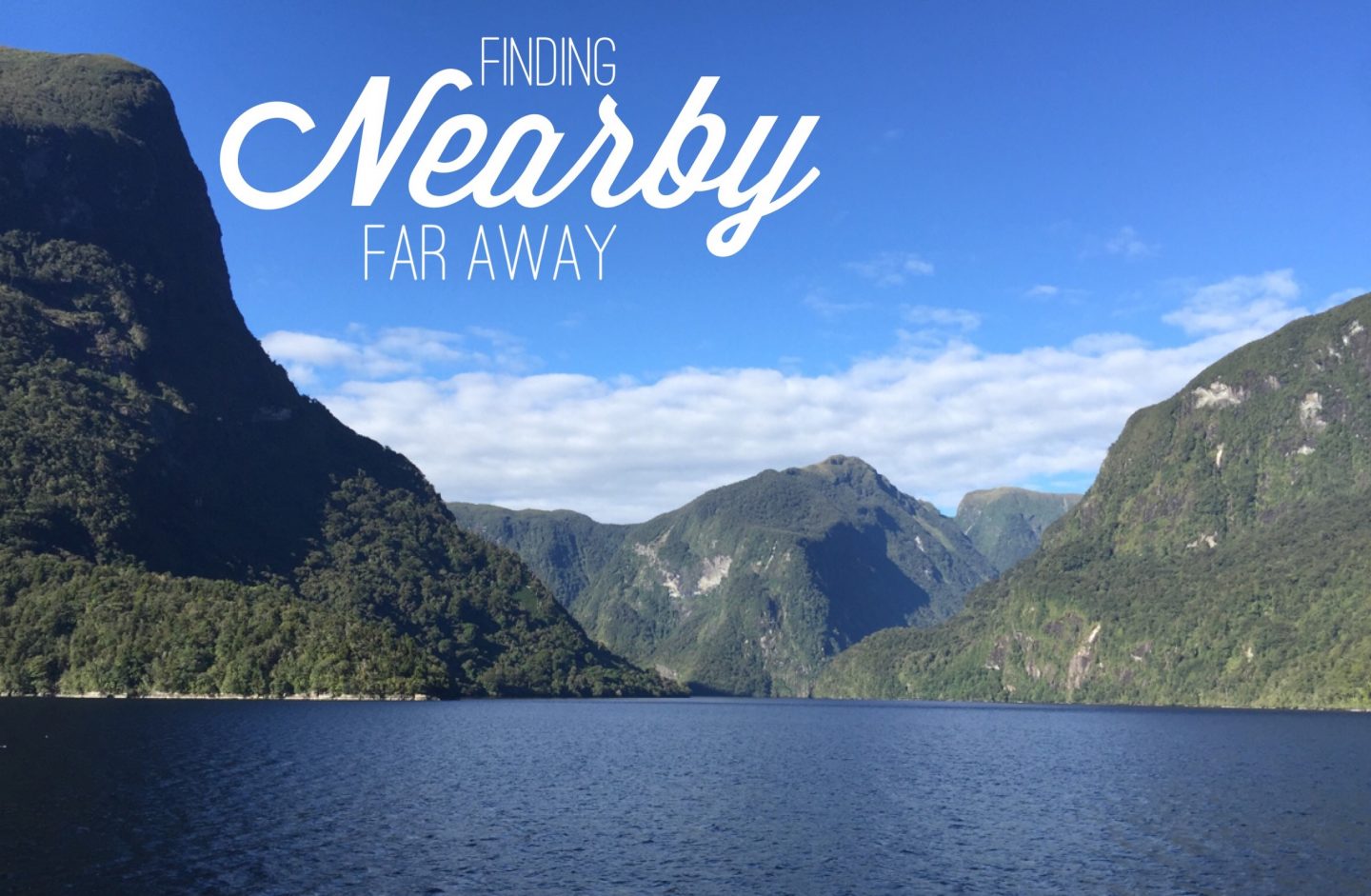 Finding nearby far away Finding nearby far away

Coming to opposite end of the planet and finding warmth from strangers. Being welcomed in to their home like a long lost member of the family.
I’ve travelled the furthest away from home then I’ve traveled before. With the open road and no plan and allowing life to open itself up to serendipity.

Recently I was caught in yet another band of cold, wet and windy weather, heading in to Queenstown. I remembered on the way in, my friend back in the uk has a brother in this town, I wonder…

Travelling with all you need with no room for things you want, such as an extra warm layer, a dry jacket or even a pair of gloves.
Choosing to travel light, means travelling fast with less cursing on those uphills. Instead I curse the unseasonably fowl weather that the South Island is experiencing. Some say the worst in their lifetime. Though I try sometimes I can’t deny that I’m English, that I live in the Lake District where it can rain so hard it rains indoors sometimes. But that doesn’t mean I have to like it

So I drag my soggy sad bones in to the first place I know that has free wifi and cheap coffee. Unfortunately that place would be a heinous place that I would never be found in in the UK… the warm glow Golden Arches shine like a rescue beacon through the grey.
I feel ashamed to feel joy.

I’m messaging my friend Sam back in the Lakes, as a puddle gathers by my feet and the cleaner comes around several times to mop it up.
Hedging my bets, I contact a few backpacker hostels in the town, ‘full to the rafters’ was one reply but echoed by the rest.

Reliable wifi and shite coffee meant that it wasn’t long until I was warm and that I had a place to stay.
After frantic Facebook messaging, an hour later the Apple app picking a fine time to update itself!stringing out this cuppa to last, Nick had opened up his home, greeting me with hot food and a warm and dry garage with Mattress on the floor. I couldn’t have been happier.
I spent two days there allowing time to wash everything I have, sometimes twice (paying particular attention to the padded merino underpants) I could explore a bit of the busy conurbation of Queenstown at my leisure. People watching mostly. I’d sit on a bench and soak up the vibe.

You’re never alone with a bike
It’s like a magnet. As I sit with the bike lent on the bench beside me. Strangers gather around the Sonder like a titanium icebreaker.
I am met with astonishment and envy (by other cycle tourers) by how little I have and how well it all fits.
I say it’s ‘All I need… but not necessarily all I want’

Leaving Nick and his girlfriend Courtney’s garage in Queenstown for a heart wrenching ride through the Von valley. The beautiful vastness stopped me. I had to get off the bike and just soak it up. Emotions surged through me and I was close to tears.

Lake Mavora gave me what I needed. A stunning view and two strangers that would share their steak, wine and stories of Patagonia and Argentina where they lived.
We chatted until I teeth chatted through the cold and dark.
I had lost my jacket that day. It fell of the rear pack. Not fixing it securely enough to cope with the 70km of dirt road. Again when you have everything you need, it’s becomes critical to keep it all. Taking a loss like that jacket was infinitely frustrating. I quietly cursed my stupidity until I was tucked up warm in my sleeping bag.
So cosy was I that despite being woken up thorough the night with strange noises worryingly close to me, like tins being rattled around by a drunk. I didn’t open up my bivvy bag to peer in to the dark. It was only in the morning when I went to get my breakfast out of my bags that I knew I’d been visited by the dreaded Kea! A big and very cleaver parrot native only to these parts. It had ripped open my bag, tearing the zipper and helped itself to my scroggin, not content with the seeds and fruit it also had a go at one of my handlebar grips. Leaving undeniable evidence of its sharp beak

I had an address in Te Anau to get to. The friends brothers girlfriends sister had a garage too.
So I’d rest there. Used her car to explore Milford Sound. It not cheating if there’s no rules to bikepacking, a trip that was 150k long with a 900m hill and a single lane 2km tunnel to negotiate. The car journey was stunning and my arse was happy for the respite. It took only a few hours rather then a trip of 4 days. 4 days that could be spend elsewhere.
You really get the feel for a place when you stop for a little while longer and take it all in. I had been racking up the miles. The longest days were also the wettest. Choosing to ride on rather then stop and be cold.

I was introduced to Phoebe and Courtney’s parents
Hunter and Clare. Legends of Manapouri and beyond.
Hunter is, as his name suggests a hunter and Clare had been a head teacher at the local Kindergarten for 25 years, she championed forest school and is a strong voice in taking the layers of cotton wool off the kids.
Moving from the garage in Te Anau to the family farm stead in Manapouri.
In return for food and lodgings I’d help out in the garden but perhaps most importantly I’d just hang out with their two German pointers hounds.
It would seem all I need is a dog fix once and awhile as these outdoor hunting dogs were secretly big lap dogs.

It’s hard to drag yourself away from paradise and the warmth of the Mann/Shaw family.

Travelling so far away from home and finding that home is where ever you are. Grace in name and in nature