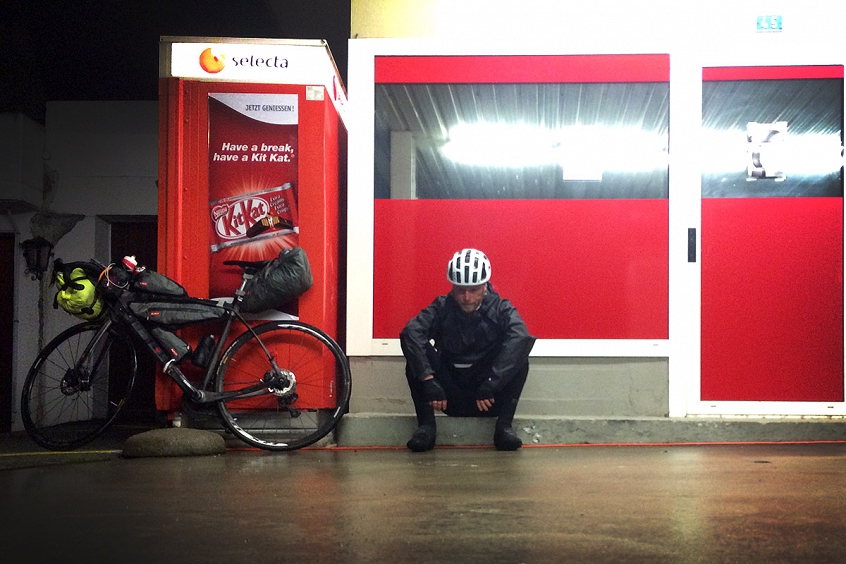 It had been a mixed last few days, but I had to press on…

Edric and I arranged the night before that we should make an early start. I am terrible with early starts, In fact i just don’t do them. Having someone else to motivate me to get up at 7am was a bittersweet relief. It was a big day today,  we were heading to Strasbourg, Edric’s home, along the flat lanes hugging the Sarr canal. Edric and I were different kinds of cyclists. Cycling next to him I realised I don’t particularly like to stop but he reminded me that I must stop and enjoy where I was rather than race ahead and get to an arbitrary destination. Ironically enough I received a message from a friend telling me the same thing too (Thanks Ant) I enjoyed this new pace and the company and the little coffee stops.

Arriving in Strasbourg and Edric’s apartment, we were greeted by his partner Aurelie and their two amazing kids. Their hospitality and warmth was so overwhelming, I stayed another day with them, hanging out in the city, going to a restaurant, resting my bones and planting a tree in their garden. Planting roots perhaps.

Fully rested, my soul refreshed, Over breakfast Edric turned to me and said that he could see I was itching to go. He was right of course, the truth is I missed the long days and the roaming and the aching in my legs.

Edric accompanied me on his fixie to the outskirts of Strasbourg. I found that it’s easier to get lost in a city. His envy of me heading back on the road was secretly pleasing to me, it helped affirm that what I was doing and what we do, was and is so cool!

Loaded up with a giant slab of Aurelie’s freshly baked homemade apple cake, I went from France quickly to Germany, following the Rhine for miles and miles. The scenery would only change very subtly. It wasn’t at all monotonous, perhaps the Joe from the comfort of a sofa would have perceived it as such, but I really just enjoyed spinning through the miles and the hours, flat and steady, I lost myself without getting lost.

I could’ve ridden either side of the Rhine, and picked either country, but from my limited time on these roads I figured that German tracks were a little more well maintained than those found in France. I just seemed to rattle through the miles, relatively effortlessly, so much so I hit upon Switzerland without paying it much thought until I approached the huge city of Basle. My luck crapped out and the weather turned on me. Cold and wet became the theme.

It was dark and late now, 13 hours had flown by. Undecided if I was to carry on, I knew that hot food was a must. I broke one of my golden rules in the golden arches. €20 for a McDonald’s meal! The first in 12 years and it will absolutely be my last, not just because of the price you understand. Hunger does strange things to me, I found that I was actually enjoying it and I could feel the energy flooding back through my veins.

By that standard of cost of a meal I couldn’t afford to stay in Switzerland for very long so my decision was made and I rode all night. Utilising what I have learnt over the last week I kept on fuelling with electrolytes, stopping in petrol stations to shelter from the weather and to stretch, have a quick feed and then get back on my bike.

I don’t know what made me want to spend all night on the saddle and just ride. Life became very pure. Simple.

I couldn’t find anywhere else to sleep in the darkness even  if I tried. If I stopped I would get cold but riding kept me warm and I kept myself going with happy thoughts and Haribo through the night in Switzerland.

I didn’t feel tired, not like I did on that long ride from Holland to Belgium, only a week before. I felt strong.

The Hills…I knew they were coming, I had been lucky to have mostly a flat time of it, but Switzerland conjures up images of hills and mountains, for good reason. I enjoyed them more than I ever thought I would: the change of pace, getting out of the saddle and pushing it hard, all that and the constant rain reminiscent of the Lake District.

I don’t know how but I’m still going…

Through the night I lost all concept of time. Enjoying the solitude of country, passing through towns with no one awake, I stayed to the deserted main roads so I wouldn’t get lost. It felt like it was all for me. I wouldn’t get off the bike even to pee anymore. I just kept going.

The sun had risen on me in France, it had set in Germany. I traversed the entire length of Switzerland in darkness, and I only stopped when the sun rose again. I allowed myself to get off the bike and I lay on a wall on the main road just for 20 minutes, I wanted to reset myself to fully appreciate this next part, a stunning twisty road which went on for ages, all the while the Alps showed themselves.

Empting all the food I had, I made a king’s breakfast in silver packets, sitting on the banks of sunny Lake Geneva, gazing upwards towards my final destination in Chamonix,  Mont Blanc.

My belly full, my spirit lifted, only 60 miles and a massive hill to contend with.

It’s the journey and not the destination that’s important and that’s why as i approach Chamonix via the huge and endlessly steep, twisting alpine road my story tails off.

The rain came with force this time, the cramp in my legs and arse became incredibly painful, when I would shift of my saddle to give my arse a break, my knees would then decide they had had enough! it was like my body knew too that the end was near, I pushed it too far and it was answering back with a vengeance. I could stop, because I might not be able to go again.

I spent the last several hours in a kind of delirium, didn’t challenge it, let it happen so I didn’t have to think. All I had to do is carry on, head down, gritted teeth.

Finding my friends apartment, I reached in to my frame bag and fished out the keys. Climbing 2 flights of stairs with the bike slung over my shoulder, I opened the door and walked to be presented with a gorgeous apartment. Finding a bedroom, I fell upon the duvet. I had just cycled 264 miles in 30 hours. No sleep and without stopping.

I completed my most ambitious challenge to date.

Attitude determines altitude. I’m pretty high right now. I took this hip flask with me on my journey. It has meant so much to me. Who’d thought a flask could. Given to me in Fort William as our In the Frame project ended, and not the way I intended to, who knew it would have led to this 2 years on.

My highest mountain. I have truly come from the lowest to the very highest.

I learnt so much more about myself and what I am capable of. This was real life

2015 was the toughest year I’ve had. Tougher than 2011 in many ways. I had lost my mobility for a short while with the ankle fusion in the January but I’d been through this situation many times before, I’d say I was well versed in set backs and climbing back up again. But this year I experienced a loss and pain I didn’t believe was possible.

I lost something I never got to meet.

After the turmoil and emotional stresses of this bleak time and the total obliteration of an important friendship. I knew I wasn’t that strong at all. I had lost myself. I had no home and no joy. So I did what I had to do and whilst this sounds twee and an overused expression, I did really have to find myself. I spent hours upon hours turning the pedals and turning my mind over and over. I’m 38 and I can’t remember the last time I had so much time alone. This is what I needed, to ride and to adventure, to give up to life’s spontaneity once more. It worked. Whilst the pain is ever present I have reset a few wrongs and I am more positive and thirsty for life and it’s hard lessons once more. I fully recommend it. You don’t have to do what I did, but get out there, connect with nature and connect with yourself.

Changing your view could change your mind

My heartfelt thanks go to friends that send me reassuring messages as I travelled. Edric and his family. Rebecca Dearden for the digs in Chamonix and You guys for getting this far in joining me in the adventure

The Alpkit crew, what can I say, without their support, motivation and gear this little adventure may have just stayed a pipedream.