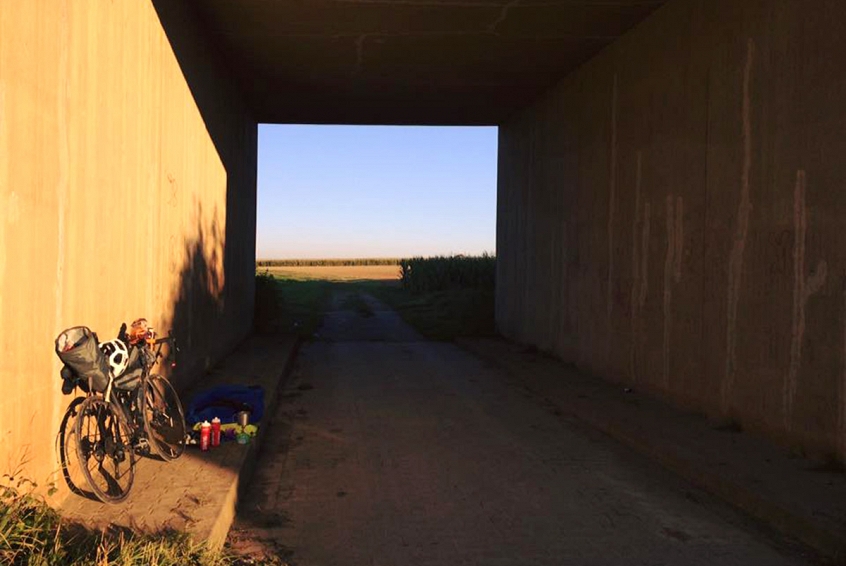 I had reached Belgium with a 163 mile day that left me dizzy and exhausted… but it didn’t mean a lie in. From here on in I started to really become aware of what my body was still capable of, and perhaps what my mind wasn’t.

By 7am the increasing traffic noise meant the end to that night’s slumber. I’m such a good sleeper too, and not good with less than 8 hours let alone 4. I gradually opened my eyes. There above my head, perched above that marble column was a giant gold eagle, shimmering in the early morning sun. I turned my head to the side. I had been so wiped out and so oblivious to anything thing else but closing my eyes that night I hadn’t noticed what was spread out before me: thousands of neatly regimented white crosses, the like I’ve only ever seen in films. I had spent those few hours tucked up in an American War Cemetery.

Blurry eyed and baffled at how deliriously tired I must’ve been, I packed up camp as stealthily as I could because even at this hour there were a troop of groundsmen going about their work. With the bike loaded up, I walked a little around the white crosses to pay my respects.

Rolling down the hill into the village of Henri Chapelle, my stomach ached.  I found a bakery. Allowing the young shopkeeper to  assume that the two others must be outside. I sat on a bench to the side of the shop: hidden from view I drank all 3 coffees and pretty much inhaled 3 freshly baked, doughy and warm saucer sized Waffles. How I miss Belgium!

I started my day in Flemish speaking Belgium then crossed an ambiguous hidden border to French speaking Belgium. Looking at my Garmin, a massive forest lay in wait for me. The smooth tarmac roads turned to loose gravelly forest trail. It proved too much for the skinny road bike tyres and I got a puncture just 10 minutes in, Not a problem I though, I took out the tube, cleaned inside the tyre, put in the spare broke out my new Co2 canister inflator… And POP! Right at that moment I wished I’d practice using this pump before I set off. I think I let it fill too fast, the gas froze the tube and it tore. That was my only spare.  I was miles from a town or anyone. If a douche screams in a forest and know one can hear it, is he still a douche? Yes, absolutely!

I should’ve carried my standard pump. I should’ve carried more than one spare. I was on my own, no one else to blame and more importantly no one to vent off too.. So I promised myself to keep my cool. I wanted my trip to be as eventful as it could despite the avoidable dramas. As peacefully and serenely as I could I checked Google Maps. I was 20km from a town, right on the edge of the forest. Ever since the accident, even with the latest surgery, I can’t walk that distance. I can’t walk down a big street without pain. So I got on the bike, said my apologies to the wheel for what I was about to do and gingerly rode on. Haribo helped in lifting my spirits  in what was hours of gritted teeth as I road on the uneven tracks, apologising to the front wheel with each stone it hit.

The forest gave way to fields and then homes, I saw a woman arguing with her son in one of the gardens, I recognised some of what she was saying: it was French. So in my finest French I asked if there was a place nearby to repair my bike? ‘Oh sure, just up the road, turn left and it’s right now.’

Et voila! Of course it was! A big bike store too!  They let me use their workshop. Loaded up with new tubes, new canisters, but with 5 hours of good riding lost, this was a tough day. Despite that I knew already I had grown and learnt. My lessons: be calm, allow spontaneity to happen, keep smiling and carry more inner tubes.

I left Belgium for Germany with very little sign that I had left one for the other. My hope that morning was to get to Bitburg, but I stopped a little short of that goal. It grew dark well before I was ready for it. I didn’t want to sleep wild anywhere near a town. I’d ridden 73 miles over a very long day. The Garmin frustratingly sent me through fields as supposed tracks. I got frustrated and tired trying to pick my way through rough terrain in the limited light.

By 22:30 I was done. I approached an underpass. I lent my bike up against the concrete wall, inspected it for dryness, rats and rubbish by torchlight. It seemed that I maybe the only one to consider this as a viable option to sleep the night. It was fascinating how I could shift my parameters of a viable place to sleep, depending on where I was or what was on offer.
I fixed my bed, complete with bivvy bag this time. It was undercover, the stars were out and that meant it was cold. I crawled in, once again fully clothed. Not even attempting to remove my gloves, I was away in seconds.

It wasn’t a smooth slumber. 2 hours in I woke. My body was starting to answer back. It didn’t like being hunched over the bars for hours on end over consecutive days. I woke up routinely with pins and needles and cramp, my body’s way of letting go, releasing the muscles as I lay. Odd thing is that at this point i felt a disconnect with my body and mind, but in a useful way. it was like at this moment my mind was stronger and it demanded more from my body and it’ll have to fall in line quick or this could hurt much more, it wasn’t going to end for some days to come. My ass had better toughen up quick.

Eyes still firmly shut, I became aware of someone whistling. All night I had been aware of the sound of the road above and the drone of the wind turbines not far away, a strange comforting link  to civilisation but the whistling was too close for comfort. I became intensely aware of how vulnerable I was tucked in my bag. I open my eyes, look toward my feet and there was a guy walking his Husky. He didn’t seem at all perplexed to see me it was only the Husky who came to sniff. I said hello and good morning in my roughest German.
I brewed up the finest packet cappuccino that Aldi had to offer, had some breakfast cake and packed my stuff with ease and pleasure. I got my bearing with Google maps on my phone, which usually spent its days in airplane mode so I wouldn’t get transported back to the life I had temporarily left behind. I triple checked with my Garmin. I didn’t want to repeat the last few hours of the night before.

Sarrbrücken, 80 miles away looked an achievable destination for today. I now had an insight of what I could achieve in a day in terms of mileage. The sun was shining and getting higher in the sky. Once again I had this overwhelming feeling of being blessed. I was excited to get moving again.

Not long after I made a little navigation error, daydreaming was coming easier to me and I missed a road that I was meant to take. I span the bike around completely oblivious to the weight it was now. I was on a farm track, loose gravel, off balance tight turn, the front wheel slipped away from under me, I fell heavily on my right side, impacting on my hip and my arm. I lay there in the gravel, searing pain, looking up at the sky.  Shame coursed through me and I was quick to check that no one saw my error.  What a stupid mistake to make. After a few minutes I picked up the bike and tried to ride on but it became quickly apparent that I could not. My elbow, my hand had completely ceased to move and were totally numb. I had to get off the bike. I sat in the road now hugely aware where I was in the world and where I wasn’t.

After a pause I climbed back on the bike. I rode on slowly for another hour or so and got to Trier, a picture- postcard German town. I rode along the river, found the first cheap looking hotel. It was a whooping €70 for the room. The dent in my pride only matched the dent in my wallet.

I stood in the shower for so long that the little complimentary bar soap vanished. I went to bed whilst the sun was still shining. Closing the curtains I lay there motionless until the next morning

I was so right spending a night in the hotel. Physically I felt good, my hand and arm were back to their normal level of function, but the fall and knock to pride was still playing on my mind. Whilst in the comfort of civilization and fluffy pillows, I was back to worrying about troubles at home when I woke. Keen to rid myself of this and get some perspective I couldn’t get back on the bike quick enough. Turning the pedals turns the mind in the direction you should.

For the first few hours I was alone with my thoughts without paying much regard to the scenery.

Deep rumination over, I started to enjoy the road I was on, where I was in that moment.

Just then I met a fellow bike packer: the telltale huge saddle bag told me this, that little nod to each other, to one fellow adventurer to another broke the ice. Edric was a Frenchman who had travelled from Rotterdam too but via Luxembourg. We quickly got the measure of each other. Smiles are a good gauge of character and we decided to ride together throughout the day.

The pair of us seemed relieved to break the internal dialogues. We chatted non stop.

Edric had booked into an Airbnb just outside of Sarreguemines and contacted his hosts and  invited me to come along. I had no other plans. I spent a wonderful evening dining and drinking with our hosts in a stunning and obviously very expensive house, all this set me back just €10. I set my bed on the floor of their spare room. I was done by 9 PM, a little drunk and sated.